Blog - Latest News
You are here: Home1 / Uncategorized2 / Notes from a SlaughterHouse – The One That Got Away

One of the more fascinating things about working as meat processor to a large variety of small farmers is experiencing the diversity of their livestock.  I never quite know what to expect from day to day.  On New Years’ Eve alone we had heritage Gulf Coast and Highland Cheviot sheep; Berkshire, Duroc, and Tamworth hogs; and Black and Red Angus cattle.  One Gulf Coaster was a large ram with an excellent curling rack of horns, which his owner had us save for his sons.  I completely understand that sentiment: visitors to my home are met at the end of the driveway by a large bony skull with great down sweeping horns, placed strategically where it can scare the bejesus out unsuspecting guests when the glare of their headlights catches the thing on a dark night. The skull is what remained of a small group of Scottish Highland cattle that passed through the T&E plant. 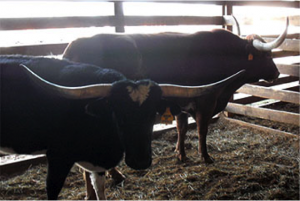 A few weeks ago we had two of the most unusual animals I have ever seen in our barn.  The owner had called to say that he had a couple of mature Texas Longhorns and asked if we’d be able to process them. “Sure, bring ‘em in“ was our reply.  I wasn’t at T&E when they arrived, but I was definitely impressed when I finally saw them.

Most cattle have prosaic numbered ear tags, but the tags on these animals set them—and their owner–apart. They had names, not numbers.  The black and white female was “Queen of Spades,” and the magnificent yellow-brown bull was “Gingerbread Boogie.” His horns were an amazing 62” from end to end.  And don’t think for a minute that he doesn’t know where those tips are.  When I first went out to see him, he walked up to the door of the pen.  I had heard that he was tame, so I put my hand through boards, thinking he might want his chin scratched. Well! He jumped back with a snort, glared at me, then very deliberately and slowly swung his head, bringing the left horn tip to where my hand had been. “Bam!” He slammed the tip against the stall door with impressive power.  He deliberately brought the right horn tip around and repeated his action, then stared at me as if to say, “Now we understand each other, don’t we?”  Yes, sir we do!

Queen of Spades lifted her tail and had a little pee.  I watched as Gingerbread Boogie tasted her urine, sticking his tongue in the stream, then curling his lips back and inhaling deeply to catch the fine aromas, like a wine aficionado with a premier cru Burgundy.  Bulls do this to see if the cow is coming into heat.  Here he was in the abbatoir, and he was enthusiastically thinking of one last fling.  I admired his spirit.

We ran the kill floor the following day when I was away at a meeting. I called in for a progress report, and my staff reported that things hadn’t gone well.  Gingerbread Boogie’s horns were too long to make it up the lane into the knock box, so they had called his owner to come take them back home.  I can’t say I was sorry to hear that they were back on pasture.  We have work to do, but we admire the animals and their beauty too.

Notes from a Slaughterhouse: Using the Whole Animal
Scroll to top